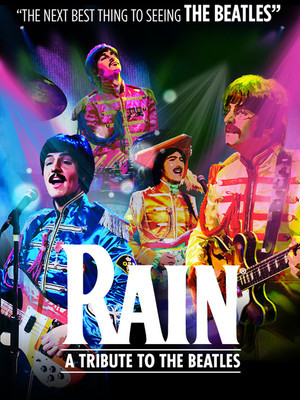 Rain - A Tribute to The Beatles

Why See Rain - A Tribute to The Beatles?

Back On Broadway - CANCELED

Together longer than The Beatles themselves, RAIN has mastered every song, gesture, and nuance of the legendary group, delivering a totally live, note-for-note performance that's as infectious as it is transporting. Now the tribute group are heading to Broadway! RAIN will light up the Lunt Fontanne Theater for a strictly limited one-week run this July.

This exclusive run sees RAIN present The Best Of Abbey Road where the group will be marking the 50th anniversary of the iconic album in style! As well as playing the big-hitting songs from Abbey Road, RAIN will also play some of the Beatle's pre-Abbey Road tunes.

No other rendition of The Beatles' music comes close to this level of performance, which has taken years of mastery and attention to detail that is unmatched. From the early days of The Beatles' appearance on the Ed Sullivan show in 1964, through Shea Stadium, the Sgt. Pepper era and on to the Abbey Road years, the RAIN captures it all flawlessly.

DRAMA DESK AWARDS 2011
Outstanding Revue
Rain: A Tribute to the Beatles on Broadway

Dave Jamieson (Jamo): “Tou Can Not Imagine How Good They Are”

Hi every one I spent four days at the show and coming from Liverpool I... more

Read all reviews Write a review

Sound good to you? Share this page on social media and let your friends know about Rain - A Tribute to The Beatles at Wagner Noel Performing Arts Center.